South Africa > The Great Train Race Tribute by Steam
​Join African Dreams and Rovos Rail on board for three days and two nights this Heritage Day Weekend as we salute the famous BENTLEY vs TRAIN race of 1930 with The Great Train Race Tribute by Steam of 2021. ​Limited Availability!
​At 5:45pm on 13 March 1930 as the train left Cannes, Barnato and his companion set off. The duo arrived in Calais so far ahead of the train that Barnato sought to put the challenge to bed by making it all the way to London before the express train pulled into Calais. They crossed the English Channel on a packet steamer, completed another 100km or so and, to loud applause, Barnato parked outside the Conservative Club in St James Street at exactly 3:20pm – four minutes before Le Train Bleu arrived at Calais Station.

The Heidelberg Great Train Race 2021 pays tribute to this maverick event with a convoy of vintage cars and motorbikes, Rovos Rail’s thundering steam locomotives and daring enthusiasts in their flying machines roaring overhead. All for one unforgettable photographic moment.
DAY 1: PRETORIA
THURSDAY 23.09
Please check-in a minimum of one hour before departure. Should you wish to visit our museum or do a site tour at Rovos Rail Station, we suggest arriving two hours prior to departure.
10:00 - Depart Rovos Rail Station, Pretoria. Guests may freshen up in their suites before joining fellow travellers in the lounge car and observation car. The train will be hauled by two steam locomotives: the Class 6 439 ‘Tiffany’ – built by Dubs & Co. of Scotland in 1893 for the Cape Government Railway – and 3360 ‘Shaun’, one of a batch of 50 built by the North British Locomotive Company in Scotland in 1948.
13:00 - Lunch is served in the dining cars as the train travels towards Heidelberg.
16:30 - Tea is served in the lounge and observation cars.
19:30 - Dinner is served in the dining cars. Overnight on board. Dress: Formal

DAY 2: TRIBUTE IN HEIDELBERG
FRIDAY 24.09
07:00 - Breakfast is served in the dining cars until 10:00.
10:30 - The train departs for Heidelberg. Dress: 1920s-era racewear
11:00 - The train meets a procession of classic cars and motorcycles, all in chronological order apart from the lead car, the 1929 Speed Six Bentley, while vintage aircraft swoop overhead. The locomotives stop next to the Bentley, waved to a halt by a chequered flag to signify the ‘end of the race’. The procession drives past the train then heads to the airfield while the Bentley parks on the platform next to the locomotives. Guests may then disembark in the appropriate attire for photographs. Remember to hide your phones as they could ruin the shots. Around noon, guests board a double-decker London Bus* and follow the Bentley on a short tour of Heidelberg. On arrival at the airfield, guests are invited to have photographs taken with the vintage cars, motorcycles and airplanes followed by lunch in the boma.
15:00 - Guests are ferried back to the train.
16:30 - Tea is served in the lounge and observation cars.
19:30 - Dinner is served in the dining cars. Overnight on board. Dress: 1920s Formal
*Should it not be possible to use the London Bus, alternative transport arrangements will be made.

DAY 3: PRETORIA
SATURDAY 25.09
Please ensure your luggage is ready for collection and that you have all your belongings.
07:00 - Breakfast is served in the dining cars.
10:00 - Arrive at journey’s end at Rovos Rail Station, Pretoria.
​​
​Secure Your Place on the Great Train Race Journey Now!
The Most Luxurious Train in the World
Since its establishment in 1989, Rovos Rail has earned an international reputation for its truly world-class travel experiences. In a series of bespoke train journeys lasting from 48 hours to 15 days, Rovos Rail links some of the continent’s greatest destinations with a variety of off-train excursions. Step aboard the vintage wood-panelled coaches and sit back as some of the most varied scenery imaginable unfolds beyond the windows. With discreet and friendly service, top cuisine and a selection of South Africa’s finest wines, Rovos Rail harks back to a simpler, more elegant era encompassing the timeless grace and high romance of African exploration. The beautifully rebuilt trains, which may be hauled by diesel or electric locomotives, carry a maximum of 72 passengers in 36 superbly appointed suites and are also available for charter, while the Events Train caters for up to 250 guests and is suitable for daytime journeys. 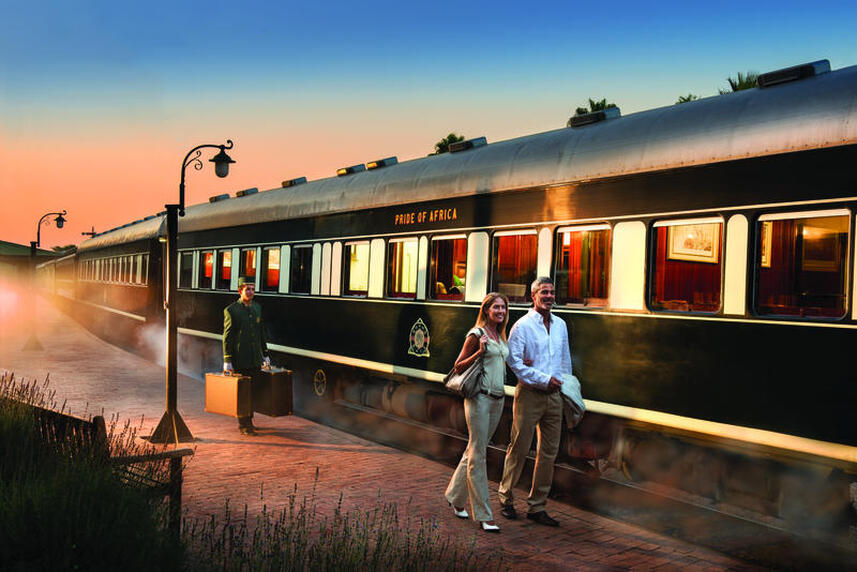 Secure Your Place on the Great Train Race Journey Now!